Where are the Biggest Fintech Startup Hotspots Around the World? 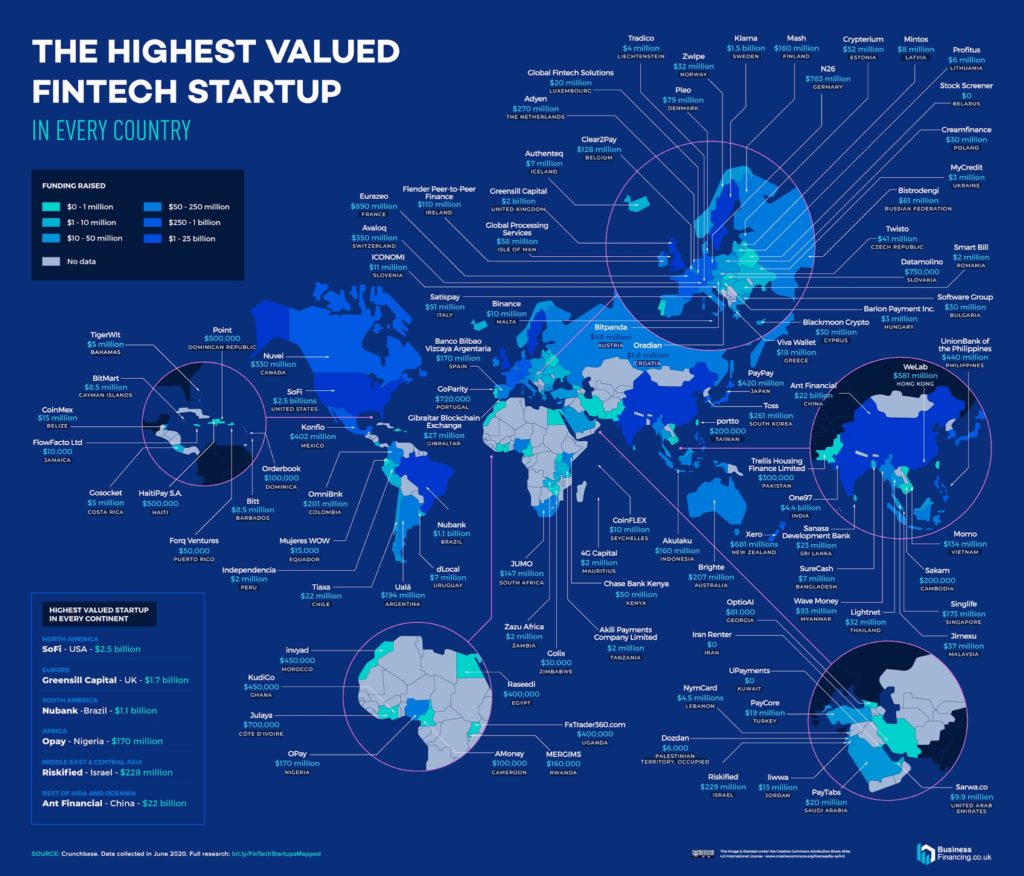 Whether we’re banking online, or paying for groceries, FinTech (Financial Technology) is having an enormous impact on our daily lives. FinTech – or financial technology – is the industry that taps into latest technological advances to perform or connect with financial services. With innovations such as mobile payment systems, stock trading apps, asset management systems, and cryptocurrency, FinTech has transformed consumer finance, as well as B2B transactions.

FinTech is rapidly transforming the financial services industry. It’s one of the fastest-growing areas of global business, and new products and services are being introduced to the market all the time. While traditional financial institutions are struggling to keep up with changes in technological advances and consumer behaviours, FinTech startups are thriving. So, let’s follow the money, and find out where FinTech startups are based, and how much funding they’re getting.

BusinessFinancing used business data from 10,000 FinTech companies to find out where the biggest FinTech hotspots are around the world.

Which countries are the global FinTech startup hotspots?

FinTech is a truly global industry, with successful startups appearing in six continents. There are clusters in western Europe, on the east and west coasts of North America, India, and some parts of south-east Asia.

The United States’ $58.8bn FinTech industry is well ahead of the curve. Leading the US market of 1491 FinTech startups is SoFi, which specialises in student loan refinancing, personal loans, and mortgages, among other services. SoFi was founded in 2011 by a group of graduate students of Business at Stanford University, and has since attained $2.5bn in backing from investors.

Although China has far fewer startups than the US, they are highly successful companies in terms of investment. Just 166 companies have attracted $42bn. The top three highest-valued FinTech startups in the world are based in China. Mobile and online payment specialists Art Financial is the industry leader, contributing more than half of the country’s total FinTech investment, with $22bn funding.

The United Kingdom is the third biggest global hotspot in FinTech. Industry leader Greensill Capital, which specialises in supply-chain finance, has received $2bn of the country’s $19bn total FinTech funding. Hosting 482 startups, London is the hub of Europe’s healthy and diverse FinTech industry.

The fourth biggest FinTech hotspot is in India, which has 200 FinTech startups and $12bn investment. The mobile commerce startup One97 is the leader of the Indian FinTech industry, having raised $4bn, a third of the country’s total funding. One97 has raised more funding than the whole of Germany, whose 101 startups have amassed a not-too-shabby $3bn, $783 million of that from the mobile-banking company, N26.

Which cities have the healthiest FinTech industries?

London is the global capital city for the FinTech industry. The supply-chain finance provider Greensill Capital is at the top of London’s 411 startup companies, having attracted $1.7bn in funding. The mortgage service provider Landbay and student finance service Prodigy International are also based in London, and raised $1.6bn and $1.3bn in funding, respectively.

Two of the top five global hotspot cities for FinTech are located in the United States. In second place, with 315 startups, New York is the biggest hub in the US, and home to Virtu Financial, which has raised $750 million with its trading and market services. Student loan and finance service specialists, SoFi are based in the third biggest city for FinTech in the world, San Francisco. There are 250 FinTech startups in San Francisco.

The fourth biggest hub for FinTech in the world is Singapore. Of the 129 FinTech startup in Singapore, the digital insurer Singlife has raised $173 million. Beijing is the fifth biggest global FinTech hub, with 67 startup companies. Of these, the digital loan and AI specialist JD Digits has raised a significant $5bn in funding.