QR Codes the tech that changed China is coming closer to home. 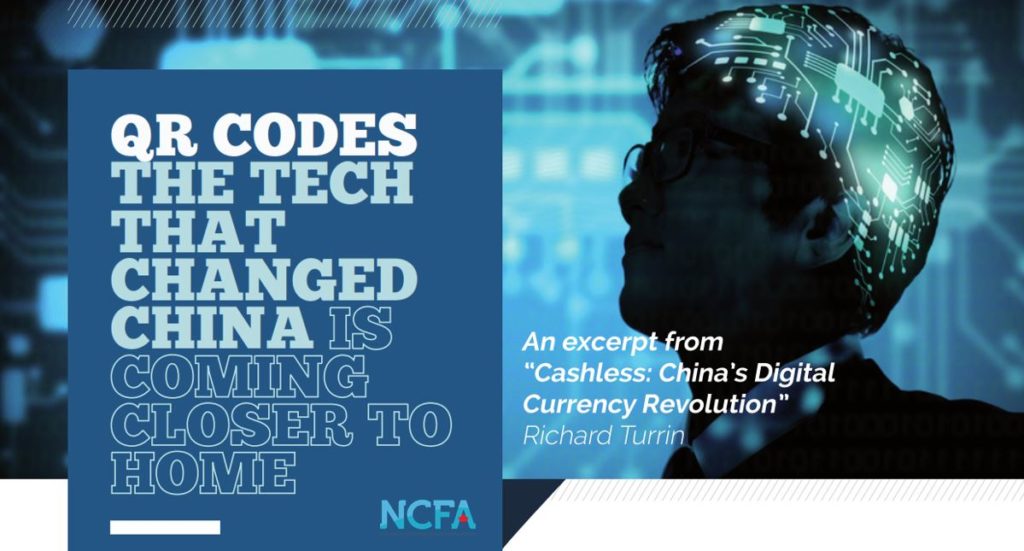 The humble QR code is at the heart of both Alipay and Pay’s systems and is the critical element of technology that allowed mobile payments to explode in China. Frankly, their simplicity and ability to receive payment without a digital connection that made these systems such a tremendous success.  The big news of course is that QR codes are making a comeback closer to home with Apple, Square and PayPal all announcing the roll-out of QR code-based systems.  So, let’s take a look at how China, the world’s expert in QR codes, uses them because you’ll be seeing a lot more of them. 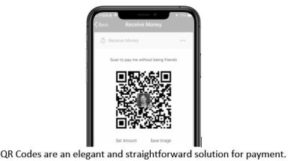 QR codes are used by mobile payment systems to give each user a digital identity when paying or receiving payment. There are two ways to pay using QR code systems to make a payment. You can pay by simply opening your phone to the payment screen, and your QR code appears on the screen. This code is captured by either another phone’s camera or the bar code scanning devices that exist at many stores.

There is a ping once the scan is done, password or facial recognition entered, and your cell phone logs the purchase as complete. In this method, the investment in new technology is negligible. The software is designed to work on just about any low-grade smartphones with a camera to make it easy to adopt, and if you are a retailer of some size, you already had the bar code scanning hardware on your point of sale devices. 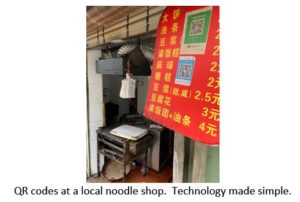 Now for the second way to pay using these systems, and the reason why mobile payment conquered China. If you are a vendor or receiver of cash, you can make use of this system with -no- technology on your side of the transaction.  That is correct; you don’t need anything electronic. All you need to do is print out your QR code so that the person paying can scan it with their mobile phone and send the money. This made accepting electronic payment within reach of everyone.  A revolution in the making, and its most significant impact was on small vendors, who had been excluded from using debit cards because they lacked the fixed lines and point-of-sale devices.

For simple shop keepers and dumpling sellers in small towns and villages, digital payments were suddenly and quite miraculously within reach. They were included in this solution because they didn’t need to invest anything more than the cost of going to a local photocopy shop and printing out their QR code, to become part of the digital world. Digital technology was finally at the service of all, including those -without- the resources to purchase access from banks. A phone was all that was needed. It was a revolution in that it allowed everyone, no matter how humble, to participate, and was the embodiment of the high ideals that both the government and private sector had for it at launch.

QR codes are so simple that you can print them out on just about anything, from electric bills to tables at restaurants.  There is no limit to what could have a QR code printed on it, and this contributed significantly to the creation of the ecosystem for WeChat and Alipay that I mentioned earlier. As you walk around Shanghai, the adoption is so incredible that almost -any- financial transaction can be done with mobile payment, and a shocking array of things have QR codes printed on them.

The key to such widespread adoption is that with QR codes, inanimate non-digital objects can join the digital world to build an ecosystem. Consider a bill you receive in the mail from a public utility. Their investment to make use of digital payments is small.  They simply need to print the QR code for your account on the bill and add some software in the backend of their systems to link their accounts to either WeChat Pay or Alipay.  Restaurants could glue a plastic tag with a QR code directly on the table to allow you to order and pay without a server.  Within two years, digital payments exploded in China because building an ecosystem was cheap, easy, and useful.

Now compare this to Apple and Google Pay’s rollout in the US market. If you were an early adopter, both technologies required you to upgrade your phone to near field communication (NFC) enabled versions.  Apple even launched Apple Pay in conjunction with the launch of the newly NFC enabled iPhone 6.  A not so subtle message to owners of earlier versions of iPhone that they would have to upgrade and buy into using the cashless lifestyle.

Both Apple and Google Pay also required that shopkeepers update their point of sale systems to include the appropriate readers. The outlay in cash for both sides of the mobile payment revolution was substantial, and many smartphone users without NFC enabled phones were simply left out. During the early years, your Starbucks may have had mobile payment, but did you notice that your smaller local coffee shop didn’t? The reason is that switching to mobile payments was expensive for smaller shops, who had to wait for the price to come down and user demand to go up. It was as if the technology manufacturers were intentionally limiting the digital payment dream to those who could afford it, rather than inviting everyone to participate.

Starbucks’ launch of its mobile app in 2009 provides a fabulously successful example of how QR codes were trialed in the US but flew beneath the radar for many.  It also shows how early adoption of mobile payment via an agnostic app helped make Starbucks a surprise giant in mobile payments. Just like China, Starbucks designed its app to embrace Apple, Android, and Blackberry users alike, and went with QR codes to defray the cost of launching the system.

To be specific, Starbucks chose QR codes to digitize its physical card system by using their existing bar code scanners.  No new hardware was required, and just like WeChat and Alipay, you could use the app on any phone.  No new phone required for users, no new tech for Starbucks.  It was a win-win for all.

Starbucks’ payment system was so successful that it eclipsed the number of mobile users of Apple and Google Pay until Q3 of 2019, when Apple Pay finally overtook them.  Critically, Starbucks was not held back by the slow rollout of new NFC enabled POS systems.  Starbucks launched its app in 2009, while the first NFC enabled iPhone 6 models launched in 2014.  The company had a 5-year lead in collecting digital users, something truly unheard of in the technology space.  Who says QR codes never made their mark in the US payment space?

By now it’s clear that QR codes are technology that simply works!  So, it should be no surprise that both PayPal and Square are rolling out QR code-based systems.  Inspired by the pandemic and people’s desire for completely touch free payment, PayPal rolled out QR codes this year.  In PayPal’s words, “a fast, touch-free way to accept payments in person.”  Not to be outdone, Square launched a restaurant focused payment system that allows completely contact free ordering and payment using QR codes.  The system closely matches a system rolled out by WeChat some years ago in China and is in use at most fast-food restaurants.

But the biggest news for QR codes comes from Apple, which is making all things old new again, and ensuring QR codes’ longevity with its Alternate Reality (AR) app Gobi.  AR superimposes virtual information over the real world, and what better way to trigger an AR advertisement or notification than with a QR code.  With AR, you use your camera to scan your surroundings, and when it finds a QR code, it triggers the AR event.  QR’s magic ingredient for our new AR world is that you can print it out and paste one wherever you wish.  Just like my local dumpling shop. 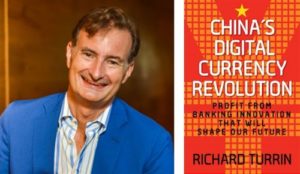 This article appears as a featured article in NCFA’s digital magazine, Fintech Confidential (Issue 3 Dec 2020). Click to read the latest thought leadership, insights and trends about Fintech in Canada