Global Business and Geopolitics: China and America Dominate Like Never Before 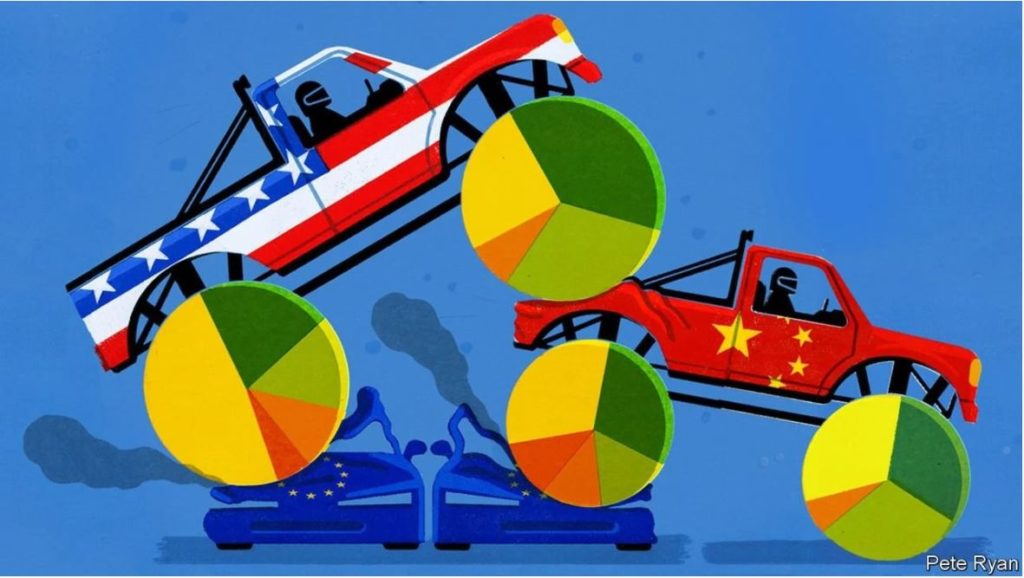 Twenty years ago this week the share price of a startup run by an obsessive called Jeff Bezos had slumped by 71% over 12 months. Amazon’s near-death experience was part of the dotcom crash that exposed Silicon Valley’s hubris and, along with the $14bn fraud at Enron, shattered confidence in American business. China, meanwhile, was struggling to privatise its creaking state-owned firms, and there was little sign that it could create a culture of entrepreneurship. Instead the bright hope was in Europe, where a new single currency promised to catalyse a giant business-friendly integrated market.

See:  Where are the Biggest Fintech Startup Hotspots Around the World?

Creative destruction often makes predictions look silly, but even by these standards the post-pandemic business world is dramatically different from what you might have expected two decades ago. Tech firms comprise a quarter of the global stockmarket and the geographic mix has become strikingly lopsided. America and, increasingly, China are ascendant, accounting for 76 of the world’s 100 most valuable firms. Europe’s tally has fallen from 41 in 2000 to 15 today.

This imbalance in large part reflects American and Chinese skill, and complacency in Europe and elsewhere.

It raises two giant questions: why has it come about? And can it last?

One way of capturing the dominance of America and China is to compare their share of world output with their share of business activity (defined as the average of their share of global stockmarket capitalisation, public-offering proceeds, venture-capital funding, “unicorns”—or larger private startups, and the world’s biggest 100 firms). By this yardstick America accounts for 24% of global gdp, but 48% of business activity. China accounts for 18% of gdp, and 20% of business. Other countries, with 77% of the world’s people, punch well below their weight.

Part of the explanation is Europe’s squandered opportunity. Political meddling and the debt crisis in 2010-12 have stalled the continent’s economic integration. Firms there largely failed to anticipate the shift towards the intangible economy. Europe has no startups to rival Amazon or Google. But other countries have struggled, too. A decade ago Brazil, Mexico and India were poised to create a large cohort of global firms. Few have emerged.

Instead, only America and China have been able to marshal the process of creative destruction. Of the 19 firms created in the past 25 years that are now worth over $100bn, nine are in America and eight in China. Europe has none. Even as mature tech giants like Apple and Alibaba try to entrench their dominance, a new set of tech firms including Snap, PayPal, Meituan and Pinduoduo are reaching critical mass. The pandemic has seen a burst of energy in America and China and a boom in fundraising. Firms from the two countries dominate the frontier of new technologies such as fintech and electric cars.

The recent erosion of this political consensus in both countries is one reason this dominance could prove unsustainable. Americans are worried about national decline, as well as low wages and monopolies (roughly a quarter of the s&p 500 index merits antitrust scrutiny, we estimated in 2018). The Economist supports the Biden administration’s aim to promote competition and expand the social safety-net to protect workers hurt by disruption. But the danger is that America continues to drift towards protectionism, industrial policy and, on the left, punitive taxes on capital, that dampen its business vim.

In China President Xi Jinping sees big private firms as a threat to the Communist Party’s power and social stability. The cowing of tycoons began last year with Jack Ma, the co-founder of Alibaba, and has since spread to the bosses of three other big tech firms. As party officials seek to “guide” incumbent private firms in order to achieve policy goals, such as national self-sufficiency in some technologies, they are also more likely to protect them from freewheeling competitors.

The more America and China intervene, the more the rest of the world should worry about the lopsided geography of global business. In theory the nationality of profit-seeking firms does not matter: as long as they sell competitive products and create jobs, who cares? But if firms are swayed by governments at home, the calculus changes.