Bank of England: rapid GDP recovery likely but prepare for negative rates in case of downturn 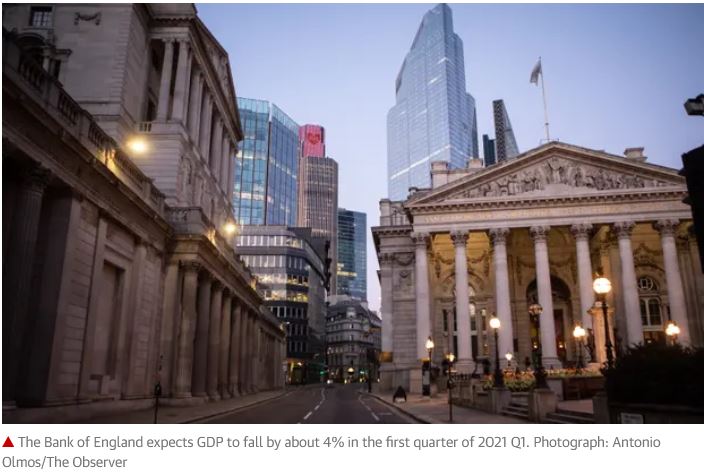 The Bank of England expects a rapid rebound of the UK economy later this year as the vaccination programme takes effect, but also announced moves to introduce negative interest rates if the recovery falters.

The Bank forecast a 4.2% slump in the first quarter, followed by a resurgence of economic activity as vaccinations allow the economy to return to brisk growth. The Threadneedle Street economists forecast that GDP will return to pre-pandemic levels by March 2022.

See:  Bank of England asks banks how ready they are for sub-zero rates

However, the central bank also said it wanted high street lenders to prepare for negative rates by July, in case there was a fresh downturn and its monetary policy committee (MPC) needed to deploy them. The Bank said this was not a sign that the MPC was about to cut borrowing costs below zero.

Andrew Bailey, the BoE governor, said: “The monetary policy committee’s central forecast assumes that Covid-related restrictions and people’s health concerns weigh on activity in the near term, but that the vaccination programme leads to those easing, such that gross domestic product is projected to recover strongly from the second quarter of 2021, towards pre-Covid levels.”

Bailey said the MPC was expanding its toolkit of measures to stimulate growth as an insurance policy in the event of a downturn and the committee was “clear that it did not wish to send any signal that it intended to set a negative bank rate at some point in the future”.

There are fears that negative lending rates, which are expected to lower borrowing costs for households and businesses, would force high street banks and building societies to offer negative savings rates. Savers would suffer a loss of income, and pension funds, which also rely on deposit savings, would also be hit.

See:  The City of London does not yet know what Brexit will mean

Officials said the balance of risks in the economy, mainly from new variants of Covid overwhelming the benefits of the current vaccination programme, meant it needed to keep rates low. The negative lending announcement came as MPC members voted unanimously to keep the official interest rate at the historically low level of 0.1%.

The Bank’s quantitative easing bond-buying programme was left unchanged at £895bn after it pumped an additional £150bn into the economy at the outset of the second lockdown in November.